The solemn celebration of the Eucharist was presided over by the Bishop of Legazpi, Mgr. Joel Zamudio Baylon, and the vows were received by Bro. René Stockman, Superior General of the Brothers of Charity, who also preached the retreat that preceded the profession.

The new brothers are from the Philippines, Vietnam, India, Tanzania, Zambia, Rwanda, D.R. Congo, and South Africa. Bro. Joseph Kasonde made his perpetual profession. Bro. Joseph is from Zambia and a member the International Novitiate’s formation team. The 21 first-year novices and several brothers from the Philippines attended the ceremony. The Congregation of the Brothers of Charity is delighted with the arrival of these new brothers, who will immediately return to their respective regions, where they will begin their service of charity. 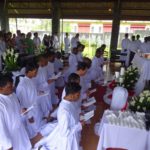 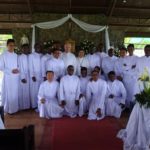