Rome, 28 December 2022 – On the day the Congregation commemorates its foundation, Bro. Waldebert Devestel, the previous Superior General, left this world to enter the eternal love of God. 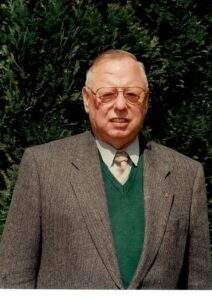 At the blessed age of 92, he could look back on a more than richly filled life in the service of caritas. It was this as a dedicated and expert teacher with the children with hearing disabilities in Woluwe, then as a supervisor of our special education schools in Belgium, until the moment he was called in 1967 to serve the congregation in the general administration.

For 9 years he was the Vicar General, the time when he worked on rewriting our Rule of Life and during which he managed to formulate our charism in a contemporary and even prophetic way.

From 1976 to 2000, the Congregation chose him as Superior General. His generalate was characterised by further internationalisation and a retelling of each brother’s missionary task. Like a good shepherd, he traversed the world and no request for help could be put aside. In every encounter with a sick person, a poor person, he heard the Lord himself speaking to him and could only answer with love. His known optimism laced with humour brought much joy to the community, and in an authentic way he gave spiritual depth to his life.

In 2000, he ended his fourth mandate as Superior General, but continued to serve for many years as superior and mentor of young brothers. To them, he was like a father and even an amiable grandfather. Or to put it in Afrikaans, he was their ‘mezé’.

Even in his old age and suffering, he remained an example to many. Any form of ambition was foreign to him and that is why he could feel at home in any company and possessed the art of making smooth and unaffected contact with everyone. In the words of our Rule of Life, he was truly a brother moved by charity. Because of his total humility, he was a giant in caritas, and in this way he will be permanently remembered in the Congregation.