Today the third part of the theme of the chapter was discussed: “In the mission of the charity”. Bro. Jimi Huayta-Rivera gave the first introduction which he placed under the icon of the washing of the feet. The washing of the feet by Jesus and the installation of the Eucharist have always to be seen together. Only when we are one with Jesus our service will be a real sign of love.

The parable of the good Samaritan was explained by Bro. Jimi in a very original way: for the two persons who were coming by the man in need was a dead man, for the Samaritan a living one in need, who just due to the attention given by the Samaritan came to the full life. That is also are task: to bring people to the full life, even if they seem to be dead for our society. Very important in this context is our exemplary function in charity. Others have to meet in us the good Samaritan and feel themselves called to grow also in mercy.

A second element he treated was the hospitality. We have to be hospitable for those who are so-called disturbing us and we have to demand ourselves how the others feel themselves with us. Every meeting with another has to help the building of the community. Expressed in a theological way it has to be a glance of the community that lives in the Holy Trinity.

We have to ask ourselves what is the most important today: do we need for the care of people always the developing of institutions? Every situation has to be examined. The essence has to remain: to give to people the full life, to repair them in their human dignity. Professionalism remains an essential element of our charity, but may never be reduced to technicity when it loses the bound with the loving basic attitude. Our care has to be holistic, and we may add to the four known elements of holistic care, the care for the environment.

The aim has always to be that we create a better place for all those who we meet. We refer here to the 17 sustainable development goals as formulated by the United Nations, which can be very inspiring and directive in our care for the fellowman. But always we have to test it to our own Christian vision. It is in this way that Fracarita International has to fulfill its role in advocacy.

There was no time to continue the discussion with Bro. Jimi about his appreciated conference, as immediately after him it was the turn for the next speaker, Father Tomaz Mavric, the superior general of the Congregation of the Mission and the Company of the Daughters of Charity. It was a real pleasure to have Father Tomaz with us, and immediately he accentuated the importance of bringing the forces of the Vincentian congregations together.

For him the Vincentian mission of the caritas is before all a mission of total availability and it calls us therefore to a dynamic love. For Saint Vincent it was all about holiness: to sanctify through a holy life the life of others, and this through an unconditional love. Totally in line with what was discussed during the past days, he also accentuated the importance of a deep spiritual life, as a basis of charitable compassion.

The many questions that were asked afterwards and the rich exchange of ideas that followed formed a nice conclusion of the theme of our chapter. It was a blessing for our general chapter to have the general superior of the Congregation of the Mission and the Company of the Daughters of Charity as a special guest among us. We were pleased to give him as souvenir of this meeting a relic of our Founder Father Triest, which was much appreciated by Father Tomaz.

The afternoon was dedicated to the meetings of the language groups in order to discuss the rich content of the morning session. 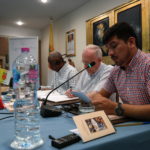 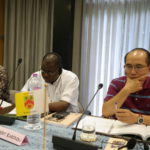 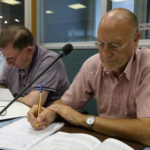 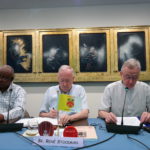 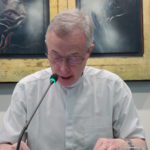 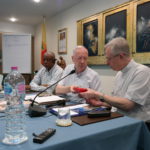 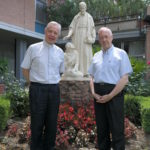 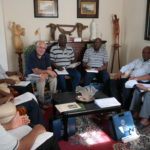