Today, the chapter was opened with a special morning prayer dedicated to Saint Thomas, patron saint of the Asian province. Provincial Superior Bro. Godfried Bekaert led us in morning prayer and formulated a number of intercessions for the brothers of the province. During the Eucharist, the rector of the house, Mgr. Dirk Smet, elaborated on the rather special example of Saint Thomas’s faith: like us, he had to learn to believe without seeing, and when he saw the Lord Jesus, he proclaimed the Deity of Jesus in all clarity.

It was a full day with reports on the life of the Congregation.

Bro. René Stockman, Superior General, opened the day with a comprehensive report on the functioning of the General Administration during the previous chapter period. He successively discussed the general policy as a governing body together with the General Assistants and the Provincial Superiors, the spiritual life in the Congregation as the basis of consecrated life, the formation of young people in the Congregation, both spiritually and professionally, the apostolate and the evolutions in pastoral activities, and a number of challenges the administration had faced. He ended with three words that are very important in the Congregation today: solidarity as an expression of the unity within the Congregation and as an expression of mutual support, gratitude for the past, and faith in God’s Providence with a focus on the future. He repeated the words of Saint Vincent, the Congregation’s patron saint: “We are to walk with Providence, not too fast or too slow.”

The Provincial Superiors then gave an overview of the various provinces.

Bro. Paulin Kindambu, Provincial Superior of Africa, gave a thorough overview of the life of the province. With 279 brothers, the African province is currently the Congregation’s largest province, and the fastest growing province. There are no less than 130 associate members. The number of brothers who are currently studying is also remarkable: 101, spread across the various formation houses in Africa and a few in Europe – in Rome, Italy and in Moerzeke, Belgium. The latter sounded as an addition to what the Superior General reported about formation: the great importance that the Congregation attaches to the formation of young people, both spiritually and professionally. Bro. Paulin’s report was an honest report, always stating strengths and weaknesses, with regard to the identity as religious brothers, spiritual life, community life, formation, apostolate, and financial viability. He ended with a clear programme for the future, with a particular focus on a more customized formation of the brothers in line with our apostolic works and also the strengthening of the leadership. He concluded with a word of thanks to the Regional Superiors of Africa, without failing to remember the brothers who had passed away during the past period.

In the afternoon session it was the turn of Bro. Joel Ponsaran, Provincial Superior of America, to present his report. He also gave an overview of the life of the congregation in the American continent, where the brothers are present in Canada, USA, Peru, Nicaragua and Brazil. A important point of attention is the lack of vocations in both North and South America, despite the efforts that are being done in the different countries. But in all the countries the charism is lived in a pure way and the hope is kept. There is of course a great difference between Canada, where the brothers don’t have a common activity anymore due to their advanced age, and the other regions where beautiful projects are developed for people with a handicap, psychiatric patients, drug addicted peopled, street children, all apostolic works in the heart of our charism as congregation.

Bro. Godfried Bekaert gave an extensive overview of the Asian province, naturally especially coloured by the feast of Saint Thomas, patron saint of the province. Many aspects of the life of the brothers were explained. It is striking that there are now globally less brothers in Asia then six years ago, due to the fact that there are less newcomers in the different countries and that there is stability lacking in the young brothers in a few other countries. So also here is the aspect of vocations an important point of attention. The Asian province is also suffering of a lack of competent leaders for the communities, but we see on several places a hopeful reversal. Special attention was given to the new foundation in Papua New Guinea where the brothers are again present after some years of absence.

The last one to present his report was Bro. Veron Raes who gave an overview of the European province, more especially Belgium, the Netherlands, England-Ireland. He commented the policy plan that was drafted by the province after the former chapter and with which the main aspects of the life of the congregation are mapped and also continue to develop. Also here there are great differences between the different countries, especially about the link with the apostolic works. More in detail was discussed how one can and has to evolve in the future. In the discussion that followed the central question was how to reach young people as congregation, referring to some other congregations that realize with international groups a new presence in Europe.

Wednesday morning we expect Brother Adrian who due to bad weather was blocked somewhere in China, but now is on his way to Rome. So we will hopefully be complete in our chapter. A new day is waiting with the evaluation of the motions of the General Chapter 2012. 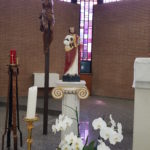 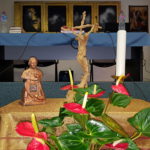 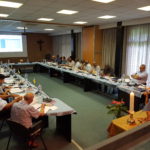 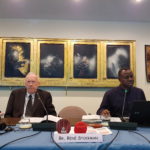 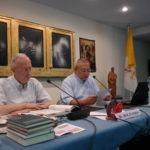 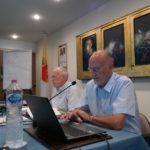 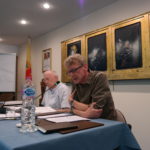