Today the motions of the general chapter of 2012 were evaluated. Every general assistant discussed some motions and presented to the participants of the chapter an evaluation of the follow-up and the obtained results.

Bro. Victor Hugo Merino-Conde spoke about the identity of the brother vocation in line with the Vatican document ‘Identity and Mission of the Religious Brother in the Church’. This document got a lot of attention in the congregation and was translated to the own situation. Also the Vincentian spirituality was focused in a special way at the occasion of the 400th anniversary of the charism of Saint Vincent de Paul.

In line with what the superior general presented about the animation material that was put at the disposal of the congregation, Bro Victor Hugo accentuated in a special way the edition of ‘Voice of the Vatican’, by which interesting documents of the Holy See with speeches of the Pope which have a link with the religious life and our apostolic works are translated in three languages and sent in a digital way to the brothers and associate members. Also the formation that was given to the superiors and took place in Africa and Asia was commented and appreciated.

Concerning the associate members the international communication has not been realized, also due the difference in language. A special attention was asked for our lay-collaborators worldwide (25,000 in total) who share our spirituality and who collaborate with the brothers on many places or who continue the apostolate of the brothers. They deserve a special encouragement.

Finally Brother Victor Hugo commented the formation of the young people in the congregation. Out of his rich experience in our international formation houses he is very well placed to give a realistic overview. Generally we may say that there is a real progress in the formation and we dispose of stable formation teams. An important point of attention remains the permanent formation for our young brothers and the preparation of the final profession. Also the spiritual formation remains an important point of attention for the future.

Brother Adrian Hartotanojo, who indeed arrived from China this morning, was immediately asked to comment and to evaluate the motion on the spiritual life of the brothers. The spiritual life of the brothers remains an important point of attention and doesn’t end with the profession, but it is a process for the whole life. The congregation is characterized by a greater internationalization, but the question is if this also present in the mentality.

Brother Adrian gave also a report about the commission that prepared the modification of the constitutions. By a very systematic approach one has examined the constitutions and has made very interesting additions that are dealing with the Vincentian spirituality, the recent documents of the Church about the consecrated life, the social doctrine of the Church and the own charism of the congregation. The results will be treated during the third week of the chapter.

Brother Jean Mbeshi went further into the internationalization and the way the brothers are sent out worldwide. We are in principle no missionary congregation, but the international solidarity and the preparedness to be sent to other countries and cultures has received during the last years a lot of attention and asks for sufficient preparation and accompaniment.

Finally he gave an evaluation of the activities of the financial commission, that proposed to add a specialist to the general bursary, in the person of Mr. Jos Leysen, especially to realize a clear overview of the financial means of the congregation, the proprieties, the budgets and the way the approved budgets are followed up in a correct way. This aspect will naturally be examined with the report of the general bursar, who will present his evaluation tomorrow.

During the afternoon session Brother Jos Mathijssen, vicar general, commented the activities of the general advisory board that was installed for the protection of children and vulnerable people from sexual abuse. This commission, composed out of several specialists came yearly together in order to develop the policy of the congregation against abuse, to do the follow-up of the presented cases and to develop a program of prevention. Bro. Victor Hugo followed a specific formation at the Gregorian University and developed an adapted formation program for the congregation, focused on prevention. We may say that that the congregation really did efforts to prevent all forms of abuse and dealt in a correct way with the cases that were known by paying a compensation.

After this report Bro Jos gave an extensive overview of the activities of Fracarita International. Consecutively were treated the activities for the collection of funds, the activities of the regional offices, the attention for the further capacity building within the regions, the defense of vulnerable groups within our care activities and the representation within the consultative organs of the United Nations and the development of the activities focused on generating income. It is striking how Fracarita developed itself during the last six year really as an important instrument within the congregation for the support of our activities, both at the level of the content and financially. The whole presentation was illustrated by a very nice year report. The financial aspect will be treated further tomorrow.

Again a full day that was finished with a good feeling. A lot has happened during the last six years in order to translate and to shape our charism as congregation in a contemporary way. 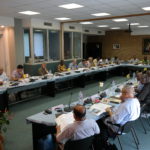 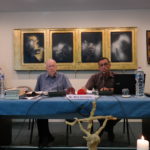 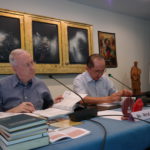 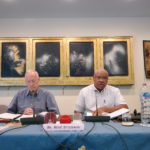 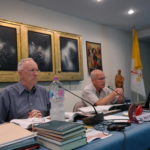