The entire morning was spent on the financial side of the Congregation. First, questions were answered about Fracarita International’s work following Bro. Jos Mathijssen’s much appreciated presentation from yesterday afternoon.

With a few specific examples from the group, Fracarita International’s activities were explained. Up until now, there was this idea that Fracarita exclusively focused on acquiring financial resources. With the examples presented by Bro. Jimi Huayta-Rivera, the continental coordinator for America, and Bro. Martin de Porres, who is in charge of capacity building, it became clear that everything should be done to strengthen the local entities, so that, in the long term, our facilities in the South and the East can become financially independent.

Bro. John O’Shea, General Bursar, presented the financial report of the past six years. The Congregation’s finances continue to be an issue and the search for more substantial solutions remains an urgent task. It was striking that, thanks to the General Bursar’s hard work, we have obtained a clearer picture of the financial policy. The assistance of Mr. Jos Leysen, who specifically worked on drawing up a clear budget and mapping out the assets of the Congregation, has also contributed to the fact that we now have a more complete picture of our current situation.

In the afternoon, the elected delegates of the provinces met to discuss the two reports: the comprehensive report of the Superior General, the Provincial Superiors, and the General Assistants, and the financial report of the General Bursar. Their report will then be presented to the two commissions from which they will derive a final evaluation, which concludes the first part of the General Chapter.

And the temperature in Rome? Every day, it seems to rise by one degree, but luckily both the conference room, the chapel, and the refectory are cool enough to work, pray, and… eat. 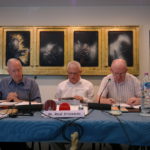 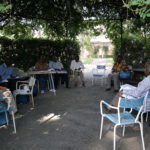 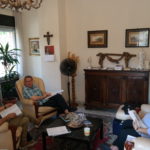 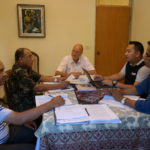 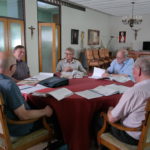