Today was the start of the Chapter of Affairs. For the next three days, the chapter theme will be thoroughly discussed.
The delegates of the associate members were welcomed: Mr. Georges Mudimbi of DR Congo, Mr. Bernard Mashaka of Tanzania, Ms. Katty Cristina de la Cruz Velásquez of Peru, Ms. Mediatrix Villanueva of the Philippines, Mr. Jacques Van Daele from Belgium, and Mr. Philippe Hody, also from Belgium.

Following a brief introduction by the Superior General, Bro. John Fitzgerald took over as moderator, because, as of today, three moderators will chair the plenary sessions.

Today, we started with the first part of the theme: ‘Be radical in the prophecy’. The introduction to the theme was presented by Bro. Martin de Porres, who had his birthday today, and who was pleasantly surprised with a birthday cake in the afternoon.
Bro. Martin de Porres gave a clear overview of what the different provinces put forward with regard to this theme, with the emphasis that radicalness and prophecy are not obvious concepts these days. He placed this task in the light of secularization, globalization, the world of communication, and living together with other religions and cultures. As a congregation, we have the task to let the true face of God shine in the world, aimed at the promotion and restoration of the human dignity of so many who have lost it. In doing so, we must remain faithful to the teachings of the Church.
Special attention was requested for the work on ‘Justice, Peace, and Integrity of Creation’, with the question whether we, as a congregation, are sufficiently sensitive to this and sufficiently active.
The challenges that he mentioned were the respect for life, all aspects related to the attack on the dignity of life, the integrity of creation, the use of the means of communication, issues that were indicated in the preparatory chapter document, with the request to take a clear stand on these issues as brothers, associate members, and as a congregation. Sometimes a prophet has to tear something down in order to build it back up and remould it. It is a delicate and painful process at times.

After the presentation, there was the first plenary meeting with requests for clarification and initial orientations. It was quite striking that a number of participants specifically referred to the figure of our founder, who was really a prophet in his time. The word ‘radicalness’ is often a heavy word nowadays, because it is easily confused with ‘extremism’.

Plenty of material to discuss in the language groups for further in-depth exploration.

The plenum resumed in the evening and the four secretaries of the language groups reported the very rich discussion.

Prophecy should always be rooted in prayer and meditation, and should radiate from our lives as religious, in communion with each other. Prophecy is always a gift from God and should be in line with what the Church teaches us. For us, Brothers of Charity, Father Triest remains a strong model of how we can be prophetic today. Our commitment to people on the margins and to psychiatric patients remains truly prophetic in many places. We must dare to ask ourselves this question: are we truly that which we are called to do? True prophecy can bring about suffering, and we must not be afraid of that. True prophecy should also connect, and reference was made to what is known as ‘systemic change’ in Vincentian spirituality.

The word radical raises questions for many people, especially because of possible misunderstandings and confusion with extremism. We searched for other words that try to express the same thing: authenticity, determination, liminality.

The question was raised how we, as a congregation, can deal with ‘Justice, Peace, and Integrity of Creation’. Would it not be appropriate to have someone dedicated to the task of dealing with this question?

The same goes for the ethical themes that we face. Would a congregational level ethics committee not be the answer and help the different regions when faced with ethical problems?

Finally, attention was asked to use social media in the Congregation better and more efficiently. It is important to send out short messages regularly, in addition to more in-depth texts.

After the session, the associate members came together for a group photo and had the opportunity to get to know each other.

A full and very meaningful day. Our Chapter of Affairs made a promising start. 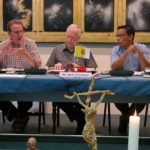 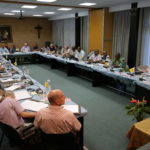 Introduction to the theme by Bro. Martin de Porres (on the right) 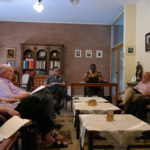 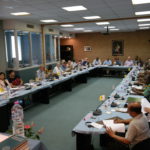 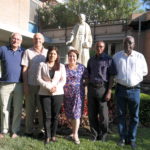 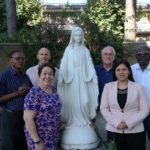